Skip to content
Posted inLiberty Half Eagles
Posted by By admin November 28, 2011 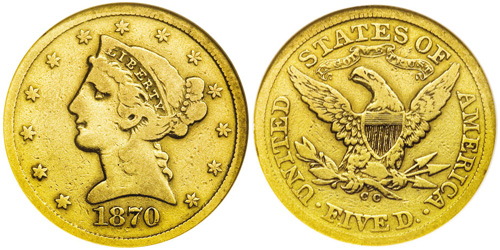 The 1870-CC Liberty Half Eagle (Buy on eBay) is one of the most popular coins of the series, as the first issue for the denomination struck at the Carson City Mint. Following the discovery of the Comstock Lode, the branch mint was authorized by Congress in 1863, although groundbreaking did not take place until 1866. The facility would be completed in late 1869 and operations began the following year, with gold and silver coins bearing the famous “CC” mint mark.

The total mintage for the 1870-CC Half Eagle was 7,675 pieces. This was not the lowest mintage among the Carson City Mint issues of the series, but it did experience the most widespread circulation. Relatively few examples managed to survive, with most of these heavily worn or exhibiting various problems. It is estimated that fewer than 100 pieces still exist across all grades, with only a handful in uncirculated grades.